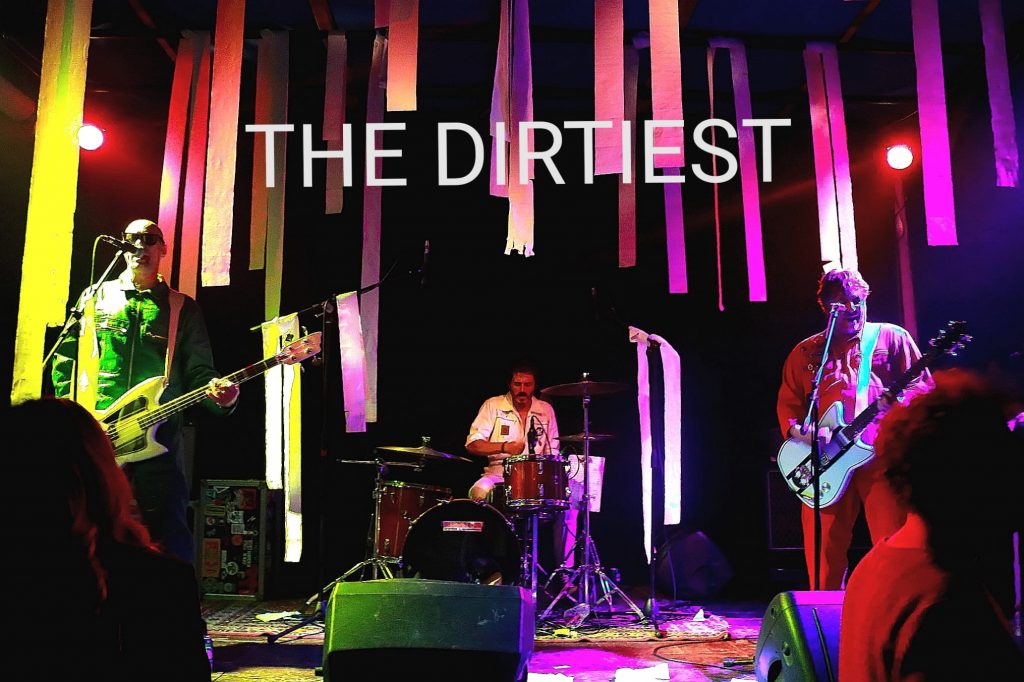 On the first hear “Alarm” might remind you of your worn copies of the earliest BLACK LIPS albums. A careful listen reveals a lot happening that makes these recordings stand out: blown out guitar string drag, gatling gun drums, and… fingersnaps? Or are those hand-claps? Or knee slaps? Take whatever it is, funnel it all into a wind tunnel, with an eerie air horn blaring from above.

One month later KAT records (NL)  released the 4 EP’s outtakes on cassette including the ep outakes.

In 2018 Slovenly recordings encouraged the band to switch its lyrics for the next songs from english to Italian. The Dirtiest took up the challenge to overcome the common bands problem of not singing in English. The result of the experiment was very exciting and a new single was recorded with the help of Tim Warren of Crypt Records (editor of the famous Back from the grave compilations)

In 2021 the Dirtiest released their first LP on Slovenly Recording called “Sovranista”.
Slovenly is extra pumped to present this platter from Tuscan punk rock paesanos the DIRTIEST. Label founder Peter Menchetti is Italian (from New York, which has so much Italian blood it may as well be the 21st region of Italy!) and while it’s not the first album we release from the old country, the DIRTIEST are the first to do it in Italiano, and you know the saying — they do it better.

Lyrically, the DIRTIEST bounce from brilliance to bonehead and then back, showing deep disgust for the status quo in Italy, and deep love for punk rock & all their pals in the scene. Musically, they are clearly picking up where the RAMONES left the SPITS & the PIZZAS off, but not without adding some strong Italian flavor. After hearing this for the first time, PERSONAL was torn between heading for Italy with his baseball bat, and sending the band a cease & desist — but then we reminded him that Iggy & Joey never busted any PIZZAS balls…

If you’ve ever wondered what makes Italian punk rock different from punk rock from Italy, this LP will show you — side A is all in Italian, and side B is all in English. The B-side tracks are only being released on the backside of this platter, so statte zitt’ e mangia! — while it’s hot!

In 2022 they started again with live shows and they played with well known garage punk band like: the Black Lips, Anomalys, Les Lullies, Deamon’s Claws, Okmonics and thy were in the part of the WE’RE LOUD Festival on the boat in Venice

They are recently arranging a new European tour in February 2023 while they kick off with the new release recording which will be a a sorto of multilingual garage core with songs lyrics and music in German, Chinese, Korean, English, Russian and many more.